Fun and Charity in Bintulu

Fun and Charity in Bintulu

The students of Bintulu Learning Centre in Sarawak know how to have a good time and give back to society at the same time.

Even though the season of giving was still a long time away, they approached several companies and persuaded them to part with goods for the children’s ward of Bintulu Hospital.

Thank you to I &S Enterprise, Urun Jaya Sdn Bhd, Hyper Printing and Kenyalang WCCT for their generosity and kindness in donating the items.

That very night, the student club held its annual dinner at the Margherita Plaza Hotel. The students came dressed as characters from Peaky Blinders, a hit TV show about a street gang based in Birmingham, England, in the late 19th century.

Bintulu Learning Centre’s celebrity students – Melissa Francis, her brother Hairee Francis, and Gabriel Fairuz Louis – performed a medley of songs to the thrill and delight of all present.

Even then, the joy of giving took centre stage as monetary aid was presented by the office of Tellian assemblyman, Royston Valentine, to seven B40 learners from his constituency. The Sarawak Premier’s political secretary, Faridah Osman, presented the aid, witnessed by President/Vice-Chancellor, Prof Dr Ahmad Izanee Awang.

“Thank you to YB Royston for being attentive to the needs of the learners in his constituency. This contribution will spur them to strive for excellent results and go on to contribute to the development of their community and country,” Prof Izanee said. 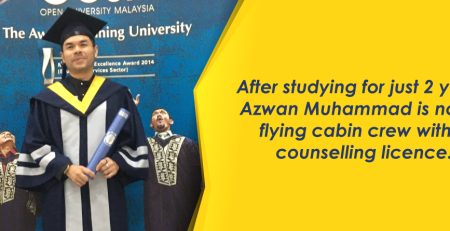 Could you imagine a flight without the reassuring and helpful presence of flight attendants? A vital... read more

One of our best-performing partner institutions beyond Malaysia is Ho Chi Minh City University of Te... read more

Thank You for a Job Well Done!

Four days. Eight sessions. Approximately 5,000 graduates. Those were the figures faced by the Univer... read more